Today we started on one of the most important annual vineyard tasks – pruning. Important because it is a major determinant of yield and of the way the vine grows during the season and the position of shoots, leaves and grapes. The goal is to leave enough buds to give a yield that the vine can ripen fully and that will result in an evenly spaced canopy of leaves with good aeration, minimising the risk of fungal disease. 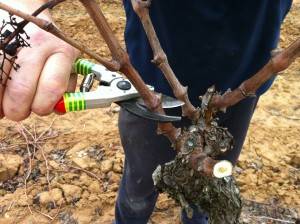 Our Carignan vines are spur pruned. These free standing vines with no trellis system are basically bush vines except that instead of growing round like a bush they are spread out along the row to allow a tractor to pass.   We are pruning to between 3 and 6 spurs per vine, depending on vine vigour, leaving 2 buds to each spur.

We select the strongest shoots from last years growth for the spurs and space them as evenly as possible.

Another consideration is the height of the vine. Over the last 60 years, the vines have gradually become higher with each year’s growth and pruning, so we tend to choose the lowest shoots as spurs and cut off parts of the trunk that are too high. With no electric secateurs, this is hard work!