Getting tanked up at Sitevi

We trotted off to Montpellier yesterday and spent a thoroughly enjoyable day at SITEVI, a bi-annual fair which showcases the very latest agricultural and winery equipment.

This was good timing as we plan to transform an old barn into a winery in time for the 2014 harvest – and it will need kitting out.

A good part of our time was spent looking at tanks. Lots of tanks. From the eminently practical but not very pretty fibre glass to gleaming stainless steel, with or without integrated cooling/heating systems. We also dropped into the tonnellerie Rousseau stand to look at wooden fermenters and eyed up a similar open top fermenter with various bells and whistles (including some transparent staves) at Seguin Moreau. The prize for the sexiest tanks went to Nomblot with their smoothly egg-shaped concrete tanks (pictured). Simply gorgeous.

We looked at various pumps (I liked the yellow ones) and were button-holed by the nice man at the alimentary paint stand. Not something I’d given any thought to but will have to.

It is also fun to look at the various options for closures and packaging. topical ivermectin australia This pretty display of glass stoppers at Vino lok caught my eye. 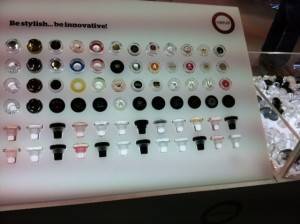 We browsed at various cork suppliers which also meant a welcome stop for a glass of port (Graham’s 10 y o tawny). ivermectin for dogs near me And admired the award winning, organic nomacorc with zero carbon footprint made from sugar cane derivatives. A clever idea.

The agriculture halls were much busier and jollier than the winemaking stands. There was also more wine flowing (those two things are not unrelated! ivermectin dosage for raccoons ). But we were on our way home and passed on all the shiny tractors – our 1970s Renault 60 will do just fine.